Port in Ustka might become service base for PGE wind farms

Representatives of PGE, PGE Baltica and the City of Ustka have signed a letter of intent regarding the possibility of establishing service infrastructure at the Sea Port in Ustka for planned offshore wind farms.

“The development of offshore wind farms is a key element of Poland’s transition – not just energy but economic as well. An investment such as this can create new jobs in Ustka, and the city itself and the wider region will gain new possibilities to develop and bring in additional investments. The service infrastructure in Ustka, given its close distance from the planned offshore wind farms, may constitute an important factor in optimising servicing costs and guaranteeing effective management of the farms, which will be of utmost importance during the operation of our installations,” said Wojciech Dąbrowski, CEO of PGE Polska Grupa Energetyczna. 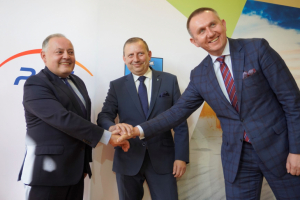 The maritime port in Ustka is one of the potential locations for a service hub for the planned offshore wind farm investments in the Baltic Sea. The advantages of this location include its proximity to the planned wind farms, its size and good navigation conditions, availability of investment land and the positive attitude of city authorities and the port’s board with regard to the proposed investment.

“As mayor of the city, I am very happy with new economic opportunities for Ustka. We want to make an effective use of them. I am also glad that PGE has declared to support our activities in the area of re-developing the port in Ustka and the construction of an access route that circumvents the city centre. I am also hoping for PGE’s involvement in community projects, which are so needed by our residents,” said mayor Jacek Maniszewski.

PGE together with Ørsted are developing the largest wind farm in the Polish part of the Baltic Sea – the Baltica offshore wind farm project with a total capacity of 2.5 GW. As part of this joint venture, PGE’s responsibilities include the construction and operation of a service port, which will become a base for the jointly developed wind farms.

The port in Ustka, aside from the port in Łeba, is listed in the National Recovery Plan, which emphasises that the offshore wind energy sector constitutes an opportunity for economic growth in Poland, including the development and expansion of local content, a key element of which is the construction of port infrastructure that will be used in the development and later the operation of offshore wind farms.