The PGE Group has taken another step on the way to implementing its ambitious programme of building wind farms in the Baltic Sea, which is an element of the company's transformation towards the low-carbon economy. On 24 January 2020 the Regional Director for Environmental Protection (RDOŚ) in Gdańsk issued an environmental consent for two offshore wind farm projects belonging to PGE, namely Baltica 2 and Baltica 3, with a total capacity of up to 2.5 GW. The decision gives PGE green light to start work on the basic design for both farms.

On Friday, 24 January 2020, The Regional Director for Environmental Protection in Gdańsk issued an environmental consent decision for two projects implemented by the companies of the PGE Capital Group: Baltica 3 and Baltica 2.

In January 2019, Baltica 2 (Baltica 2) received a proposal from Polskie Sieci Energetyczne (PSE) of technical conditions for connection to PSE for 1498 MW. In 2014, Baltica 3 has concluded a connection agreement with PSE for 1045 MW.

This is another milestone in the implementation of the PGE Capital Group's Offshore Programme. The decision gives PGE green light to start work on the basic design for both farms, located about 30 km north of the coastline at the altitude of Ustka and Łeba in the Pomeranian Voivodeship. The capacity of a single turbine to be installed at the project implementation stage may vary between 10 and 13 MW depending on the technological development and the variant chosen.

Through the diversification of energy sources and our investments in, among others, offshore wind farms, Poland is able to gradually reduce the share of fossil fuels in the national energy mix. This is in line with the expectations of the Polish government. The offshore Baltica 2 and 3 wind farms are key elements in the process of change that occurs in the PGE Group, but also an important contribution to the nationwide energy transition – says Henryk Baranowski, President of the Board of PGE Polska Grupa Energetyczna. 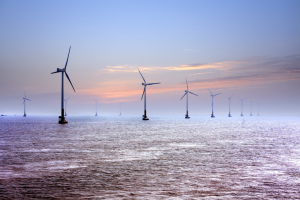 The Offshore Wind Energy Project in the PGE Capital Group is jointly formed by:

Ultimately, PGE intends to sell 50 percent of its shares in two companies – Baltica 3 and Baltica 2 – to a selected strategic partner and then implement them together with the partner in a joint venture. The aim of the cooperation is also to build the competence of PGE Baltica so that in the future the company can carry out offshore projects by itself.

On 20 December 2019, PGE signed a preliminary agreement with Ørsted describing the framework for cooperation in the transaction of acquisition of shares by the Danish company in two offshore wind farm projects, EWB2 and EWB3. The agreement, which is non-binding in nature, will be the basis for further negotiations between PGE and Ørsted, which are to lead to the agreement of detailed transaction documentation, including, among others:

In addition, in December 2019, PGE Baltica has launched an innovative research project on the impact of wind flow caused by large offshore wind farms in their surroundings (the so-called blockage effect). On this basis it will be possible to estimate the future productivity of farms more accurately.

The schedule of activities provides for a period of several years to prepare the technical basic and obtain the building permit. The energy from the first wind farm built - Baltica 3 - can already flow into the grid around 2026. The operation life of the Baltica 2 and 3 offshore wind farms is expected to be at least 25 years.

As the leader of the energy transformation in Poland, PGE is aware of the changes taking place and the challenges that the energy sector faces. The transition of the Group towards RES is a response to the needs of a changing world. Out of concern for the natural environment, in its activities, PGE focuses on innovative and low-emission solutions. The implementation of 2.5 GW offshore wind power projects under the PGE Group Offshore Programme will allow to avoid emissions of around 7 million tonnes of CO2 per year, and the green electricity thus produced will be able to supply as many as 4 million households.

The PGE Group also wants to maximise the potential of solar energy. PGE has already signed letters of intent with Azoty Group and Zakłady Chemiczne Siarki "Siarkopol", PKP Polskie Koleje Państwowe and KGHM Polska Miedź, assuming the use of land of these companies for further investment projects involving photovoltaic panels. The Group will also use its own land – the photovoltaic installation will be built, among others, at the Bełchatów Power Plant. PGE's objective is to reach 2.5 GW of installed photovoltaic capacity by 2030.