While world leaders were discussing green transition at the climate congress organised by US President Joe Biden, the fate of the future of the mining region at the junction of three borders - Poland, the Czech Republic and Germany - is at stake in the Court of Justice of the European Union. A CJEU decision is expected in early May on a request for the immediate closure of Poland's Turów mine, which could lead to a sharp economic collapse in the province and also shake the stability of Poland's power system. In order to make EU leaders aware of the scale of the disastrous social consequences caused by the sudden closure of the mine, the owner of the Turów complex is launching an international information campaign entitled "Green Deal, not a Grim Deal". 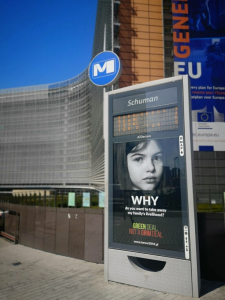 PGE's campaign, which starts a few days after the world climate summit organised by the U.S. president, is to draw the attention of politicians in Brussels to the uncertain fate of the community in the Polish region, whose livelihood depends on the existence of the Turów power complex. It provides electricity for 3 million households and a livelihood for tens of thousands of Poles employed in the complex or in cooperating companies and of their families. The precedent-setting application to the Court, together with a request for the immediate closure of the Turów mine, is a threat to their future and at the same time calls into question key assumptions of the EU's so-called "just transition" plan.

"We want to make European leaders aware that the problem of the undoubtedly necessary transition we are already pursuing is transnational in nature and affects many mines in Germany, Poland and the Czech Republic. This is not just a matter of the Turów mine, which is becoming an anti-example of the lack of European solidarity before our eyes, but also a symbol of the lack of respect for people who believed that the transition could be fair. Today, Turów's employees feel cheated because they naively believed that they were facing a stable, long-term process of modernising the region and changing the economy to a new, green track, as announced by European leaders. While waiting for a decision on the possible closure of the mine from one day to the next, they stop believing that the European Green Deal will provide them with safety and a good future, because our perspective is a social and economic disaster" – explains Wioletta Czemiel-Grzybowska, President of the Management Board of PGE GiEK.

The challenge of transforming the lignite-based energy sector is most acutely felt in Germany, Poland and the Czech Republic, which mine deposits concentrated in the same region, at the junction of the three countries' borders. A total of nine Czech and German mines operate in close proximity to the only Polish mine in the area, Turów. With one exception, they all mine significantly more lignite than the Turów mine.

"The plan adopted by the European Commission to implement the so-called European Green Deal envisages the implementation of a carefully planned energy transition over many years, based on a fair climate policy. At the same time, the proposal considered by the Court concerns the immediate closure of only the Polish mine, which in practice will mean the exact opposite process – namely, the beginning of an unjust, "predatory" transition, through the rapid decommissioning of an important energy complex. This is a direct route to an uncontrolled explosion of social problems resulting from a lack of livelihood for thousands of PGE employees and its business partners, who sustain the economy of the entire region" – adds Wioletta Czemiel-Grzybowska, President of the Management Board of PGE GiEK.

In its response to the CJEU complaint a dozen days ago, the Polish government said there is no plan to expand the mine and the demand to halt operation at Turów is disproportionate and does not ensure a proper balance of interests. At the same time, the position stresses that the closure of the mine would expose Poland and its citizens to irreversible damage, as it would have severe economic, social and environmental consequences, including reducing the country's energy security. The Polish authorities also claimed that none of the allegations raised in the complaint would lead directly to the need of stopping the mine. A few days ago, during the 2nd TOGETAIR Climate Summit, Prime Minister Mateusz Morawiecki stressed that a clean environment is the national goal of the Polish government, while pointing out that the energy transition must be just.

The PGE Group, including the Turów power complex, has already started to implement the assumptions resulting from the European Union's climate policy. A transition plan has been developed for the region, which envisages maintaining the role of the complex in the future Polish system of green energy, taking into account securing jobs and economic and social stabilisation of the region, with gradual and planned phasing out of conventional energy.

An effective and responsible implementation of the Green Deal requires huge investments in the coming years, as well as long-term plans to modernise the power sector. After receiving financial support, low- and zero-carbon energy projects have a chance to transform Turów into a green energy centre using the existing energy infrastructure, new RES generation technologies and energy storage.