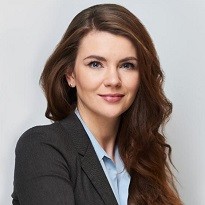 Wanda Buk
Vice-President for Regulatory Affairs
The Management Board of PGE Polska Grupa Energetyczna S.A. discloses that on August 18, 2020 the Supervisory Board of PGE adopted resolution on appointment of Ms. Wanda Buk to the Management Board of the eleventh term of office as from September 1, 2020 and entrusting her the position of the Vice-President for Regulatory Affairs.

Ms. Wanda Buk holds the title of attorney, she graduated from the Faculty of Law and Administration at the University of Łódź, as well as the Faculty of French Business Law at the Université de Poitiers in France. She also graduated International Military Relations at the War Studies Academy, European Academy of Diplomacy, postgraduate studies at the Warsaw School of Economics and the prestigious Leadership Academy for Poland programme organised by the Center for Leadership in cooperation with Harvard University. She started doctoral studies at the War Studies Academy.

Ms. Wanda Buk has held position of the Undersecretary of State at the Ministry of Digital Affairs since July 2018. She has been managing Telecommunications Department, Legal Department, International Policy Department and Office of the Minister (in the scope of matters resulting from the reporting relationship of the Digital Poland Projects Centre with the Minister). At the same time she has been a member of the Committee for European Union, the Standing Committee of the Council of Ministers and the Joint Central Government and Local Government Committee.

From January 2016, Wanda Buk was the director of the Digital Poland Project Centre. She managed the institution responsible for implementation of European funds earmarked for the digitisation of the country. She was responsible for the implementation of EU-funded projects with a total value of PLN 10 billion, including: building IT and telecommunications infrastructure providing access to fast broadband, development of high availability and quality electronic services, digitisation in public administration and culture, building digital skills on a national scale with particular emphasis on coding, as well as promoting basic computer science knowledge in various social groups.

She worked in a number of law firms, where she implemented infrastructure projects, including ones financed from public funds. She also advised entities operating on the regulated market. She was a member of Supervisory Boards in companies such as Nask 4 Innovation sp. z o.o., NUW sp. z o.o. and Mana Solid Invest sp. z o.o. Ms. Wanda Buk is fluent in English and French.